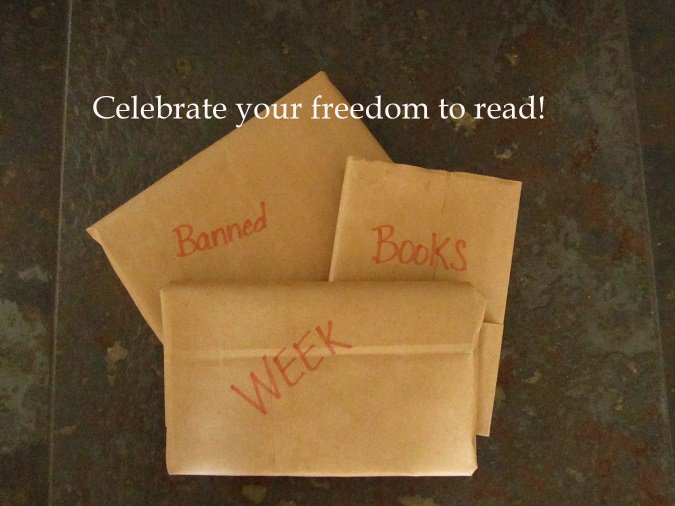 Have you read The Hunger Games, Fahrenheit 451, or To Kill a Mockingbird? If so, you’ve read a banned book. Congratulations!

The American Library Association promotes awareness of challenges to our right to read everyday, but the last week of September is a time to celebrate our freedom to read with Banned Books Week.

School districts and libraries are no strangers to censorship. They get hundreds of book challenges a year. A challenge is when a person requests a book be removed from the shelf. That person has found something offensive in the book and does not want others reading it.

If a book is removed so that others may not enjoy its pages, it is a banned book. A banned book is censorship.

I get one question repeatedly when I speak about banned and challenged books. “How is a book banned if I am able to purchase it?” The answer is simple and complicated. A banned book is not banned nationwide. It is banned in a school district or community.

So many of our greatest literary treasures have been banned or challenged throughout the years. Here are a few of my favorite books removed or attempted to be removed from shelves around the country. It is by no means a complete list:

Everyone has the freedom to express their point of view. When the expression turns into censorship a problem occurs. Banned Books Week raises awareness of the importance of intellectual freedom. If we do not fight against book challenges and bans, we could lose one of our most basic rights.

If you read my post titled, “Weekend Road Trip,” you know I recently visited Mark Twain’s boyhood home. Mark Twain is the author of two of the most challenged books. A few years ago, some thought it would be a good idea to scrub books like The Adventures of Huckleberry Finn of an offensive word. The first scrubbed books were printed in 2011. I can imagine what Mark Twain would think of such an act against his literary works. Changing the words changes the story and takes it out of context.

Challenges and bans happen for many reasons. Obviously, offensive words is one reason, but others include religion, defiance of authority, witchcraft and wizardry, sexually explicit, violence, homosexuality, or unsuitable for an age group. Unfortunately, many times books are challenged without being read.

Books allow people, especially young people, to explore their world and their beliefs. It provides a safe place to examine themselves and find their way.

A perfect example of the value of a book that is often challenged is Speak by Laurie Halse Anderson. It is on my list above because it is an amazing book. More than that, it has helped many young adults deal with and understand a very difficult, but very real situation. Anderson created a poem titled, “Listen,” to give a voice to the overwhelming response she received from readers of her book. It is a moving demonstration of the impact one story, one challenged repeatedly, can have on someone who is lost.

I should note that most people who challenge books have good intentions. They want to protect others, usually their children, from what they perceive as the ills of the world. I cannot fault someone for protecting those they love. Instead of challenging a book, perhaps a discussion about what is concerning about it might be more appropriate. A conversation about the book is a great way to share thoughts and build stronger relationships.

I cannot list all the books that are challenge or banned. Please visit the American Library Association website to find an official list of the most challenged and banned books by year, by decade, or by author. You might find one of your favorites on the list.

2 thoughts on “Banned Books Week: Celebrate your Freedom to Read”