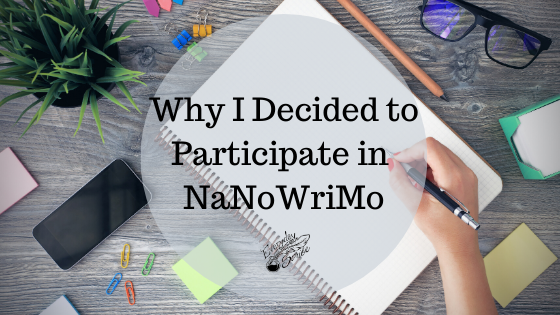 The year was 2015. I just quit my full-time job in June and was well on my way of creating a life of writing. Except, I wasn’t writing all that much. Then, I stumbled upon NaNoWriMo.

NaNoWriMo is short for National Novel Writing Month. Every November, writers from all over decide they are going to “win” NaNoWriMo by writing 50,000 words in 30 days. An impossible feat you might declare, but if you break it down, it is less than 1,700 words per day. It is completely doable.

Spoiler alert: I did not win.

I did write over 17,000 words that November. Most of the words were terrible, but that is the point. The participants of NaNoWriMo are not expected to have a finished novel at the end of the month, they are supposed to have the bones.

It is quite fun. There are online forums and in-person meet-ups to help you get your words down. They play fun games like word sprints where authors write like crazy, competing to see who can get the most words written in a timed sprint. Often, refreshments like coffee and cookies are available at the IRL writing sessions for the writing weary.

It is also stressful. Writers put pressure on themselves to get their words in. If they don’t meet their goals, then they feel they must write even more to catch up. People are constantly posting their word counts and exalting the number of words they wrote in a day. All, so they can “win.”

But what do they win? Nothing really. They win the satisfaction of knowing they wrote 50,000 words. Whether or not those words are decent enough to be created into an actual book remains to be seen, assuming the words are ever seen again. Many winners say they never look their novel after the month is over.

It is because of the stressful part of the month that I decided not to participate. I write every day anyway, though maybe not on my WIP (work in progress), and I certainly do not write anywhere near 1,700 every day. Also, my WIP is not a full-length novel. In fact, I’m not sure I ever saw myself writing full-length novels, so the thought of needing to write one in a month is probably one main reason why I failed NaNoWriMo in 2015.

The next year, I made a half-hearted attempt to win. It is almost a right of passage, it seems, for a writer to win NaNoWriMo. I felt, as a writer, I must try. I did not win again. By default, since I did not win, I failed.

Those words: failing or not winning, marks me. Perhaps it is invisible by the naked eye, but the label is there, in the back of my mind. I failed NaNoWriMo. I tried to make it better for myself by saying I didn’t meet the goal, but I learned a lot. While true, it doesn’t quite take the sting out of not winning – failing.

Then I came to my senses.

I have not participated in NaNoWriMo since my two failures. Every November I mark the occasion with a passing thought. I am not a novelist. I am a poet, flash fiction, and short story writer.

But, this year, with four days until the beginning of the month, I decided to unofficially participate in NaNoWriMo.

Why would I set myself up for failure – again?

NaNoWriMo should be fun, not stressful. There are so many aspects of NaNoWriMo that I love, so I want to participate. I’m just going to do it my way.

2 thoughts on “I Decided to Participate in NaNoWriMo”